A little while ago Davy Quinlivan did a Facebook post about films he hadn’t seen. Reading the list if I’d been wearing pearls I’d have clutched them and would probably still be holding them now!

So this is the list and next to each one Davy I’ve given you a reason as to why I think you should watch them.

ET Melissa Mathison died too soon. She was a powerful writer and although this film doesn’t show her best (see Kundun for that) it’s still worth a watch in honour of her. Also, Drew Barrymore is amazing in it (“Is he a pig? He sure eats like one!”) and the music is fantastic.

Home Alone This is one of those where you rooting for the bad guys. Why they didn’t just pull out a pistol and pop a cap in his forehead is beyond me! Still it’s worthy of a viewing so you can keep cheering for Harry & Marv. Just don’t expect anything they call acting other than from John Heard and Catherine O’Hara. Also, it’s a John Hughes and we’ll talk more about that later on in the list young man!

Home Alone 2 Brenda Fricker. That is all.

*The Wizard of Oz Oh come on Davy! Watching Franz Morgan play so many differents role but staying exactly the same (basically Sandra Bullocks entire career) is worth the watch let alone seeing Judy! And Wicked makes more sense if you seen this. And Margaret Hamilton! At least try the 1925 version which is VERY different but also great.

Mrs Doubtfire This is worth watching for two reasons. The number of continuity errors and realising that Sally Field never ever does any kind of background checks on this mad woman who claims to be English but has a random Scottish accent that changes at random times.

Babe There is only reason to watch this movie. Magda Szubanski. She was in her early thirties when she played Esme Whatshername and does the job so incredibly well. It’s a far cry from Sharon Karen Strzelecki.

Titanic If you won’t watch the entire film then just watch one scene. The scene where the bow rises, falls, rises again and sinks. All that was filmed on a sound stage with the bow of the ship recreated and stunt performers flying everywhere. As much as I’m not a James Cameron fan (except for Terminator (1 only) and The Abyss) this scene is cinematic gold in directing, staging and performing. Fun fact: this film is two hours and forty minutes long – the exact length of time it took for the Titanic to sink.

Annie Albert Finney and Carol Burnett make this movie an utter pleasure to watch. The girl the plays Annie, well, not so much.  Thankfully she hasn’t been in much else.

*The Sound of Music I don’t know where to begin with this one! It is one of my all time favourite films and there are so many good reasons to watch it. Even if you take out all the music the story is still so emotional and so beautiful. The very fact it’s based on a true story also makes it powerful. I adore Christopher Plummer and he’s so good in this. The scenery is stunning and you can go to Vienna and see it! The music is perfect and I don’t just mean the singing, the incidental music as well. The drama, the romance, the comedy all worthy of watching. I can’t believe I’m going to say this given how many amazing films are on this list but if you only watch one movie from this lot make it this one.

Charlie & the Chocolate Factory I’m not sure if you mean the 1971 version which is “Willy Wonka & the Chocolate Factory” or the 2005 “Charlie and the Chocolate Factory.” If we assume it’s the latter then I agree with you. Avoid it like the COVID, it has no redeeming features. Tim Burton is not the god people seem to think he is. Now, it we’re talking about the 1971 version there is only one reason to watch it. The problem is I can’t tell what that is as you’ll just watch the one scene. You need to watch the entire thing as a thank you to the actors and producers for the one scene worth watching.

Star Wars (All of them!) Space sci-fi is such a subjective genre. You either like it or you don’t. Nothin I can say can convince you otherwise. Personally, regardless of your feelings for SciFi, I think you should watch these. The story is great. Should you decide to watch them then there’s two things you need to know. 1. You’re not alone, no one likes JarJar and we’re sorry. 2. This is the order to watch them in: *New Hope, Rogue One, Empire Strikes Back, Phantom Menace, Attack of the Clones, Revenge of the Sith, Solo, Return of the Jedi, The Mandalorian (the entire series), Force Awakens, Last Jedi, Rise of Skywalker.

Star Trek (All of them) See above but without the order.

*Back to the Future (All of them!) I have so many happy memories associated this film. My cousin took me to see the film. It was the first time I’d been to a cinema without an adult. I felt like such a grown up. I also had the hots for Michael J. Fox. The film is beautiful and all three deserve a watch just so you can complete the story. I apologise now for Mary Steenburgen but you can’t have everything. Also, the second one is a bit “Oh my god, please make it stop!” but stick with it.  Please.

Indiana Jones (All of them) Raiders of the Lost Ark is a cinematic storytelling masterpiece. But, like with SciFi, it’s not for everyone. The first one is worth watching for it’s cinematography alone, let alone the action. Ignore some of the effects though – you have to remember this was made in 1981 and CGI wasn’t what is is not. Skip Temple of Doom, it’s a bit meh,  but do take in the Last Crusade, it’s fun. The franchise ends there Davy. It ends there!  There are no Indiana Jones films after the Last Crusade. No matter what you read in silly magazines or online there is nothing – NOTHING – after the Last Crusade!

Dirty Dancing To be honest I’m not a massive fan of this film but there are two reason to watch it. Firstly seeing Lisa rehearse for the talent show, secondly seeing Patrick Swayze dance up the aisle looking like Roland Rat.

*Flashdance I literally sighed when I saw this on your list. This film wipes out Step Up and all those films like that. It is so so well made. Yes the story is pish. Like utter pish but the music, the dancing, the everything! (but not the story). Sit down one night, maybe with an amontillado and a small box of Milk Tray and give it a watch. And let me know when you do and I’ll watch along. This film is so good!

Ghost Okay, I’ve seen this but I’m gonna tell you not to bother. I genuinely like Demi Moore but in this she’s just a bit meh. Whoopi Goldberg is funny but if you see Whoopi in anything other than Corinna Corinna or the Color Purple then you’ve already seen her performance. Patrick Swayze just doesn’t do it for me and never has. So, you get a pass for this one. 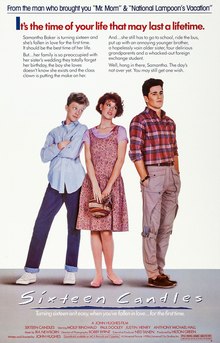 Pretty in Pink My cousin will tell you “this is the film that defined my childhood!” but my cousin is stupid. Like proper stupid, no common sense what-so-ever and her parents are the same. Her mother is the most annoying woman you could ever meet.  Have you see (and I’m frightened to ask) the Birdcage with Robin Williams and Nathan Lane? You know the end where Gene Hackman leaves the club – he’s the spitting image of my Aunt, my cousins mother. Seriously, it’s like putting make-up on a bulldog. She has all the allure and personality of wax-clogged hearing aid from 1961. Anyway, I’ve digressed a little. Davy, you need to see this movie. Just for the feel good factor. John Hughes tried, and with some success, to define the 80’s and even though most of his films have the same feel good undertone and the same tired adolescent cast, they’re actually well worth a watch. It’s not one of those you’d go out your way to see but if RTE have it on one Wednesday night when you’re not going out and there’s nothing else on, it’s worth sitting down and seeing.  I’ve a lot of love and respect for John Hughes (yes, even with what I know I’m going to write about the next film). He died way too soon and had a lot more to give the industry.  His legacy has left with many characters we love and some we love to hate and as much I don’t think this film would be in my own personal top ten of John Hughes films, it is till worthy of watch because it’s his.

Sixteen Candles See above – and yes my cousin will say the same about this film. There is one big issue with this film. It essentially, in one scene, condones date rape. This is a teen comedy written at a time when – yes it was wrong – but society dealt with stuff differently because to be a voice of a concern you had to have a big profile. Now you just need a social media account. You might see a similar scene in a film these days but either the hero would call them out on it or it wouldn’t be a comedy. I’m not going to say don’t watch this because of that because I genuinely do think it’s worth watching, you just have to do it and accept it’s from a different time. Thankfully, in tv and movies, we rarely see the kind of bullshit people would broadcast years ago. “Rising Damp” and “It Ain’t Half Hot Mom” were so insanely racist but people were stupid back then and accepted it and those that didn’t couldn’t find a platform big enough to be heard.  Anyway, that’s a TEDtalk for later.  Watch this for the soundtrack if nothing else!

So here endeth the lesson. Davy, I think you need to make an effort to watch some of these and those are the ones with * next to them. Let me know when you do, I’d genuinely be interested in your opinion.

Lets be honest here twenty-seventeen hasn’t been a great year for movies. I’m quite sure many will disagree. Good for you. If I was to compile a top ten of the last ten years then it’s doubtful one would include any of these. Harsh? Maybe. Opinionated? Totally. But isn’t that [Read more…]

Thoughts and questions for the next Star Wars

Millennium Falcon How this ship is still flying is beyond me.  Don’t get me wrong, I love the Falcon and in a few years I plan to own one and do the Kessel run in 11 parsecs, but right now I’m amazed this particular YT-1300F Corellian Light Freighter is still [Read more…]

My weight over the last three weeks. Starting to actually enjoy the gym although still having moments of anxiety.

Galway Pride is going to be the death of me. #JustSayin